In Autumn of 2010 Kavisha returned to work with Harry Williamson engineering, mixing and mastering at Spring Studio in Prahan with Nano Stern from Chile producing.This album featured 10 original songs from Kavisha who sang ,played accordion,guitar and Balinese flute and toys with strong support from world music veterans Irine Vela on Bouzouki and guitar,Peter Vadiveloo on Percussion and voice,Nano Stern on Fiddle, Electric Bass, Charango, Nylon String Guitar , percussion and voice, Kiki Wilmot on Backing Vocals,Steve Taberner on Double bass and voice and Harry Williamson on Vocals and gong. Kavisha won The National Film and Sound Archive Award for Best Folk Release of the National Folk Festival in Canberra in 2011. 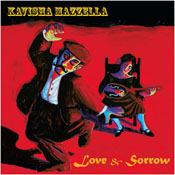