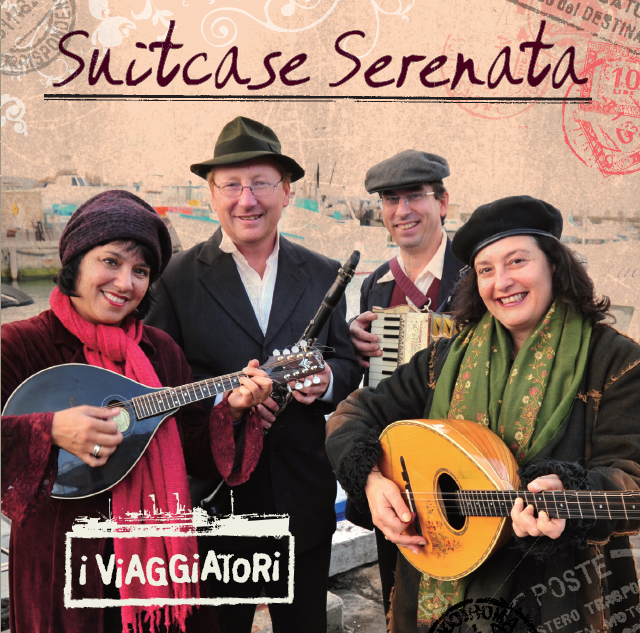 Don’t miss out on seeing I VIAGGIATORI:

WHAT THE PRESS SAY about "Suitcase Serenata"their new CD

"with a charming combination of Italian Standards and original songs by Kavisha Mazzella,and a touching version of Waltzing Matilda, this all accoustic album chronicles the hopes and memories of our italian community.An authentic,joyous,well performed musical travelogue." 4 and a half stars  out of 5 !SETH JORDAN ,ABC Limelight Magazine May 2010


INTERVIEWS PLEASE CONTACT KAVISHA MAZZELLA
Mob: 0412 893 355 This email address is being protected from spambots. You need JavaScript enabled to view it.


FOR IMAGES and MORE INFORMATION go to: www.viaggiatori.com.au

for info on the FILM
Tony De Bolfo (Dall' Italia All' Australia film) - This email address is being protected from spambots. You need JavaScript enabled to view it.

On Our new Album " Suitcase Serenata"

About the Band
When ARIA award winners Kavisha Mazzella and Irine Vela team up with Wollongong’s own David De Santi and Mark Holder-Keeping from the legendary Zumpa band they become “I Viaggiatori” - The Voyagers.
I Viaggiatori play lively, old time Italian folk music from the 19th century and beyond. It’s romantic, poignant, frenzied ,sweet and earthy. It’s a place where memory sits down with imagination to share a good coff ee and a glass of grappa then have a good yarn.It’s also a place where accordions, clarinets, bouzoukis, mandolins and tambourines dance with sensual, earthy vocals.

Drawn from over 400 years of storytelling, these songs from Italy and Greece tell of harvests, war and revolution, factory protests, seductions, weddings, funerals and the brave act of migration. The rich melodies make your feet dance and heart sway with abandon.. I Viaggiatori  perform their passionate and emotive take on Italian folk music and beyond and will be bringing their new CD, Suitcase Serenata.
The CD Suitcase Serenata transports you to forgotten fishing villages, moonlit olive groves, and a hard life under a hot sun where women sang melancholy songs of lost love, displacement and revolution and fought hardship with a fierce sense of humour.

I VIAGGIATORI’s debut album Suitcase Serenata is a poignant and earthy homage to Italy and the thousands of people who have immigrated to our shores. Part travelogue, part lament, part protest you will be captivated by this intoxicating album peppered with traditional and original roots music unearthed and inspired by Italy and the Italo-Australian diaspora.

Suitcase Serenata is a window into another time and another place, with the sounds of folk, celtic, gypsy, blues and Italian world music woven expertly together by this impressive quartet.

There’s the vocals of Aria award winner Kavisha Mazzella, well known in the Melbourne world music scene for her original songs which slide smoothly from heartbreaking passion to dreamy high notes. Her rich sound is reminiscent of Portuguese Fado queen Mariza, fused with the social commentary of Luka Bloom. The clarinet - sometimes haunting, sometimes joyful - is played expertly by multi-instrumentalist Mark Holder-Keeping; whilst the tremble of the bouzouki is enough to make you melt under the expert musicianship of Irine Vela from another lauded aria-winning group -The Habibis. David De Santi, one of the most well known names on the folk scene in Australia – as accordian player, band leader, folk historian and artistic festival director – is bound to get your feet tapping to his authentic yet fresh interpretations of Italy’s world-famous tarantellas and waltzes.

Since forming in 2006 I VIAGGIATORI (The Voyagers) have always had the ability to take listeners on a vivid and sensory journey. I VIAGGIATORI was formed by Kavisha Mazzella to perform live with silent documentary film ‘Dall’ Italia All’ Australia’ for the 2006 National Folk Festival in Canberra. The film chronicles the voyage of the passenger steam-ship Regina d’Italia (Queen of Italy) at the turn of the century. Melbourne journalist and author Tony De Bolfo stumbled on "Dall’ Italia All’ Australia’s" existence through his research for his book entitled "In Search of Kings" (Harper Collins Publisher). Since that time the band has performed the music to the film at festivals and cinemas around Australia.

From the rugged coast of Napoli, to the rice fields of the Po river valley, to the misty mornings of Fremantle, there’s no need to board a plane – although you may well be inspired to - with I VIAGGIATORI’s charming debut - Suitcase Serenata.